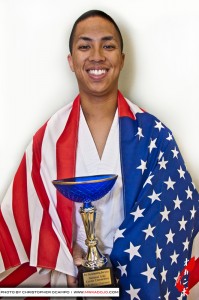 The Founder and Chief Instructor of MidWest Karate-Do Association.  He holds the rank of San-Dan (3rd Degree Black Belt) in Shotokan Karate, and has over 17 years of Martial Arts experience (Karate, Taekwando, Judo and Boxing).  Mr. Ocampo has received his Bachelors Degree in Psychology with a Minor in Anthropology from Loyola University Chicago.  With numerous medals in both Regional and State competitions, Mr. Ocampo has also been a U.S. National Karate Team Member competing in international competitions.
Mr. Ocampo’s passion lies in the training and development of his students.  He believes that “it is only when we aid in the development of others that we truly succeed.” In turn, his success has manifested through his students by creating National and International Champions.
Sensei Alexis Ocampo

An Instructor for MidWest Karate-Do Association.  Ms. Ocampo has over 13 years experience and holds a Ni-Dan (2nd Degree Black Belt) in Shotokan Karate.  She was recognized as being one of the youngest students to receive her Ni-Dan at age 13.  Currently, she is a member of the U.S. National Karate Team.  In 2006, Ms. Ocampo competed in the Junior Pan American Championships in Curacao and took home a gold medal in kumite. She presently is a two time WKC Junior World Champion—taking home four gold medals in both kata and kumite for the U.S.  For two consecutive years, she was voted “Best Competitor of the Year,” and recognized as the youngest female to receive this honor twice by Sensei Chuzo Kotaka—Founder of the International Karate-Do Federation in Hawaii.  Furthermore, Ms. Ocampo is a six time AAU State and Regional Champion.  She is also a five time AAU National Champion.
Sempai Justin Marquez 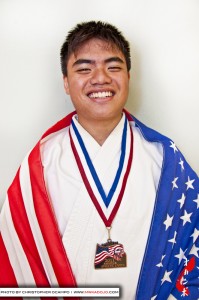 An Assistant Instructor of MidWest Karate-Do Association. Mr. Marquez has had a passion for karate for nearly 12 years and continues to learn and train in his art. He is currently ranked Sho-Dan (First Degree Black Belt) and has competed in state, regional, and national competitions, taking top three in his division. Mr. Marquez had the opportunity to train at the Olympic Training Center in Colorado Springs for the U.S. National Grassroots Training and Development Program. Outside of karate, Mr. Marquez is a lead dancer for the Filipino cultural dance group (Sulyap Pilipino Cultural Dance). He is a current member of the National Honor Society and is the founder and director of Downers Grove South High School’s Cultures In Alliance.
Sempai Eddie Laviste 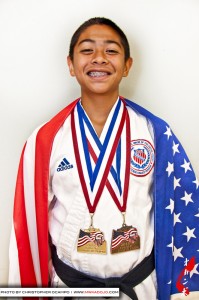 An Assistant Instructor of MidWest Karate-Do Association. Mr. Laviste has been studying karate for about 5 years. His current belt rank is Sho-Dan Ho (Junior Black Belt). Mr. Laviste competed locally, regionally, and nationally, taking top two in his division. In 2007, he was the National Champion in his age group for kumite. Aside from competing and training, Mr. Laviste’s goal is to become a dentist when he gets older.